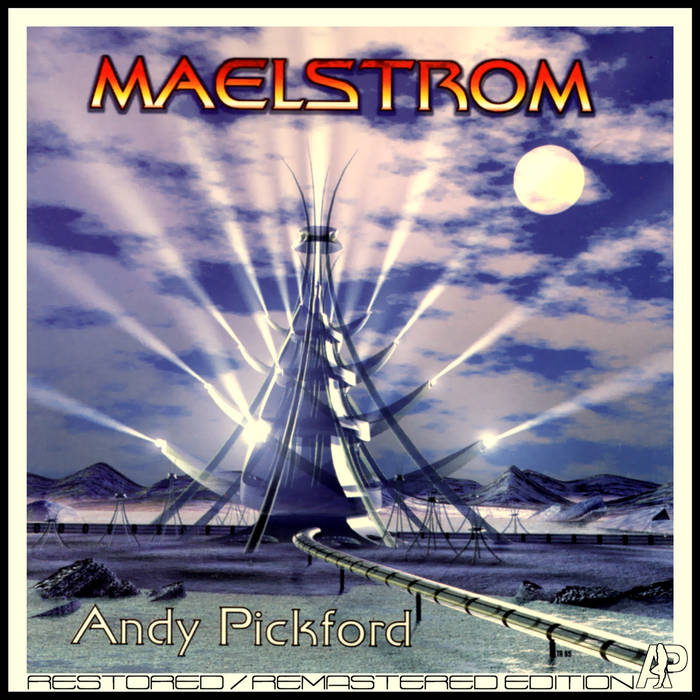 Gideon Morley This is one of my favourite albums of all time....simply wonderful! Favorite track: Cathedral.

torfik AP at its best. We find here also a short insertions in the ambient style. Fortunately, there are more great melodic playing and rhythmical sequencing. Favorite track: Oblivion.

The pioneer of digital music known as Andy Pickford has re-released his seminal LP record album, “Maelstrom,” to today's global online audience. The album is a remastered version and presents a crisp, fresh, dynamic sound to Pickford fans both new and old. It contains over an hour's worth of remarkable and evocative electronica music listening, and remains one of the most important albums to modern techno and EDM subgenres ever released. Originally distributed in 1995, “Maelstrom” became a staple measuring stick for other important digital composers of the time, such as The Chemical Brothers, The Crystal Method, and Moby. Though Pickford had already been cutting records by 1983, “Maelstrom” became one of his best loved LP releases, and is even more relevant and striking today than it was twenty years ago.

Pickford himself cites as artistic influences artists such as Tangerine Dream, Jean-Michel Jarre, Vangelis, The Orb, Boards of Canada, and various progressive rock bands. Audiophiles will easily discern elements of each of these acts in “Maelstrom,” particularly in terms of tone and timbre. Pickford's compositions do have inspirational, passionate chord progressions that are reminiscent of the Greek musician Vangelis, who is best known for “Chariots of Fire.” “Maelstrom”'s tracks also share much with the dreamy, early ambient work of The Orb, whose “Little Fluffy Clouds” single helped to bring European house music to North American radio stations during the alternative music explosion. An all-time classic of electronic music across the genres, “Maelstrom” is a legitimate godfather of electronic rock, ambient, chillout, and Berlin-school music.

Andy Pickford's first record, “Linear Functions,” was released in '83. 1992 saw his move to the Centaur music label, on which he published four records, “Replicant,” “Terraformer,” “Dystopia,” and the original release of “Maelstrom.” Throughout the nineties he produced album after album, including popular releases “Xenomorph” and “Nemesis.” Again from Centaur came his hit 2003 record, “Lughnasad,” which furthered his global fame and has since become one of his most important releases to date. A clutch of LPs in collaboration with other EDM writers, as well as several excellent solo EPs have also been published in the last few years.

All tracks composed, performed and produced by Andy Pickford.